Upon my arrival at Keflavik International Airport at 6:30 am, I met up with Sara Maynard who is also visiting Iceland and is from Berkley, California who happened to be arriving at the same time as myself on a plane departing from Boston, Massachusetts versus my flight that arrived from New York City.  We happened to discover our coinciding arrivals through the Iceland Group on the Couchsurfing website, this is simply a great place for Icelanders, people that live in Iceland, people who will be traveling to Iceland or just Icelandophiles to get together and exchange information, plans, and ideas.  I remember walking off the plane and thinking how small the terminal was and how empty the baggage claim is at such an hour.  As everyone arrived from both flights the room filled with somber emotions of tired passengers moving to retrieve their belongings and embark for their final destination. 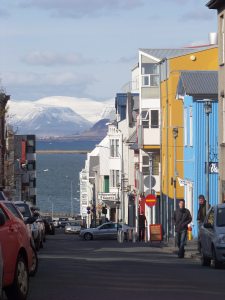 I went ahead and called Sara on my personal cell phone to identify who I was actually looking for; since upon first glance, I did not see the girl in the pictures I scrolled through only days before and then after officially meeting we then decided to catch the bus from Keflavik to the Capital city of Reykjavik.  The countryside was breathtaking as farmhouses, beautiful shorelines, vast mountain ranges in the distance and small fishing villages outlined the hour long journey to the north.  I joined Sara in her walk from the bus station to one of the International student dorms in hopes that there would be extra room for me to join her if given the opportunity; if only to sleep for a few hours until the town became more alive and to get out of the cold would simply be an ideal situation.

Sam Monroe who is studying here in Iceland from Quebec was more than happy to host me as well but not fond of the idea of waking up at 8 am to open the front door to let us in.  But after opening the door he apologized for not being more hospitable and went back to sleep which was exactly what I was looking forward to after he informed me I could stay.  The student dorms luckily had an area on the top floor that they had set-up for couchsurfers to stay and as long as you were able to find floor space to claim it was yours.

We settled in and got comfortable before drifting off to sleep for a nap that would last until around 3 pm local time where we got dressed and walked about the town to get a better feel for our surroundings and truly embrace Reykjavik.

We first walked around the lake which lead straight into town and stopped at a local store to buy something to snack on which consisted of Skyr.  Skyr is an Icelandic style strained yogurt that is healthy and popular in the typical Icelandic cuisine and with the added fruit flavor is delicious.  We then ran into Sam and a fellow couchsurfer named Alex who is also from Canada and chatted for a bit before going our separate ways.  Sara and I began our explorations of the city to capture the beauty, architecture, culture, and the very aroma that embraces this enchanting place.  As we walked down Laugavegur, the main street in Reykjavik, we see a cityscape of beautiful brightly colored buildings with backdrops of water, ice and mountains.  Steep side streets descending to the water’s edge with compact cars lining the streets and an array of colors identify the structures that lead the way to the unyielding seawall. We walked along the water’s edge and embraced the sea’s impact with the magnificent rock wall separating the water from the sidewalk that runs along the shoreline.  Ocean sprays hitting our cheeks with each upcoming impact a mystery where it will escape past the wall to drift in the wind and catch us off guard.  We reached Jon Gunnar Arnason’s prominent sculpture Solfar, also known as the Sun-Craft, which is the image of Reykjavik with its sleek contemporary portrayal of a Viking-age ship made of silver steel extending through the air and situated perfectly close to the water’s edge.  We then made our way back up the side streets to the main street to glance through local stores, take in the beauty of Iceland.

We then made our way back up the side streets to the main street to glance through local stores, take in the beauty of Iceland through galleries of local artists lined with photos and even bought tickets to see Robyn DJ at a local nightclub on Friday night.  We then got back to the CS dorm and met Libby from Boston, Sara from Oregon, Dominik from Australia, Alex from South Carolina, and a few others who came in and out of the kitchen on the third floor.  We cooked, ate and then talked for hours about life and adventures of all sorts.  And as a treat, Libby and Sara baked us cookies made with semisweet chocolate, oatmeal, brown sugar, eggs, milk, flour and a delicious raspberry delicately positioned on top for that little touch to make it the perfect indulgence.

It got slightly dark around midnight where the sun hits the horizon and begins to ascend upward as if setting and raising at the same moment.  A couple people came in raving about the Aurora lights they had just witnessed with bursts of red flashing through the sky; dancing across the blanket of night and unlike anything they had witnessed during their time studying at the University of Iceland.  We ran out hoping to catch a glimpse of the sight but with no luck. Maybe tomorrow night!  We were also lucky enough to meet other couchsurfers staying in the attic including Dave James Paul from Michigan, who is on a journey to where ever his heart desires; hitting the coast of Thailand, the Scotland islands, England & Wales, from Western Europe to the Balkans, Japan, Korea, Crete and more.  Furthermore, we met two business partners from New York City, Ian Schenck and Jon Stasiak who were great friends and perfect companions to relax in the lagoon with, enjoy the nightlife and have a laugh at smart ass comments from Ian or insightful ideas from Jon.  Great companionship for a beautiful journey through the most Northern Capital in the World!