I arrived in Tallinn around 6:30am today after a long nights sleep on the bus from Vilnius to Tallinn. I had to take the number 2 trolley into the old town where I followed my map to the Old Town Hostel where I will be spending the night. I spent 200 EEK = $15 for one night in this dorm room that held six beds. I had to leave my ruck-pack in the lobby until my room was ready at noon and I headed out to begin my day. I began my explorations with a visit to the port where a fairy travels between Tallinn and Helsinki as well as other Scandinavian cities. The views of the channel that separates Estonia from Finland was not anything spectacular but there were some multicolored condos along the water that looked classy. Old factories and soviet style buildings surround the port and I climbed to the top of the abandoned buildings near the dock to look for even more interesting views of the port.

I then walked through the old town gate to the large church with the noticeable green steeple to get a better glimpse of Tallinn. The climb to the top was all by winding stairs and was a nothing less then a workout; but the view was well worth it. Many churches spread across the horizon; colorful buildings throughout the old town and a Russian Orthodox Church in the near distance stand out among everything with its unique style. To be able to see the old town and the walls that make up a very interesting historical district yet a backdrop of modern hotels and skyscrapers depict the current development of Tallinn most likely since their independence from the USSR. At the top I met a guy from Colorado, James Buttrill, who was also visiting Tallinn for the first time. We talked and visited a few more sites together including the Russian Church and two other magnificent places of worship along with a walk along

the city walls and through the city center where we went separate ways.

I then ate at the oldest pub in Tallinn which I enjoyed a goulash, boiled potatoes and a feta and olive salad. I then continued to explore the city before heading back to the hostel to take a long well deserved shower and a short nap. I then woke up around 21.00pm and met two girls who are now staying in my dorm room. One of the girls is from South Korea and the other from Spain who was both studying in Finland and decided to visit Estonia before heading back home. I then walked around looking for something to eat and a little entertainment. I ended up having a Greek salad and then attended ladies night at the gentlemen’s club Stiletto. Free Vodka and orange juice and two male Russian waiters danced to entertain all the girls who had showed up. It was nice to be out and enjoy the music and a couple drinks. I then met a group of guys from Manchester, one guy in particular was very social and told me about their journey across Europe with 100 guys, 10 girls all traveling in cheap cars for 3000 Kilometers. Interesting Euro-trip; I then watched my new Indian friend and some Russian locals sing Karaoke and then I headed back to the hostel to finally get a good nights rest. Tomorrow I will head out to Pärnu to see the beautiful Estonian beaches.

The next morning I walked all the way to the bus station about three kilometers and I got a ticket for the 12.30pm bus to Pärnu. I am now writing in my travel journal and watching the Estonian countryside with bright green grass and fields of yellow flowers that give it the perfect touch. Little farm houses and small sporadic towns break this landscape and remind me there is life among this beautiful stretch of natural scenes. 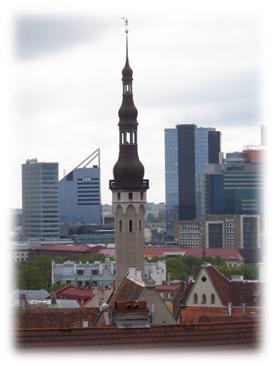