As the sun sets behind the Andes Mountains, the white snow-capped peaks begin to lose the bright majestic effect which makes them stand out among the other surrounding summits in the distance. Still visible with the outline of our tents pitched in the sha

dow of this vast mountain; the scene looks picturesque as I gaze across the rows of tents that make-up our first night’s camp site. We escape the cold into a long green tent to enjoy a dinner of stuffed beef steak, rice and mashed potatoes by candle light. The ideal dinner to indulge in as we exchange stories of various travels and thrilling adventures with our new hiking companions Allyson and Kat.

The laughter fills the empty space as we continue our Peruvian cuisine and the night couldn’t seem to get any better.

But as I stepped out beneath the pitch black night sky; it was one of the most marvelous sights I have ever seen. Faint outlines of mountains surround us with a sky painted in stars. I have never seen so many stars visible from any point in the world that I have ventured to like that night in Peru.  While the moon was nowhere in sight to spoil this vast emptiness; we are now in a distant valley far from civilization and the pollution of city lights. The Milky Way stretches across the sky outlining where our journey began all the way to where Mount Salkantay could once be seen; a river separating the sky into two halves extending across the universe, as if outlining our path over the mountains that we will explore during the next few days to the ruins of Machu Picchu. The cold leaves my mind as the beautiful sky overpowers my senses. 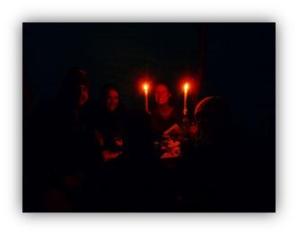 The others are asleep now at 9pm since we must wake up at 5am to continue our journey.  I sit here surrounded by the cover of darkness.  From time to time I stop to write how I feel in this moment  and of my first day trekking through the mountains of Peru, as a flashlight illuminates the pages of my journal.

Shooting stars, the sound of running water, dogs barking in the distance and the faint chatter of Spanish tongue; most likely the guides discussing the days ahead. Other than that I sit alone for what seems like a life time with the blanket of stars above me. And I feel as if those are the only two things that matter at this point in my trek.  At -15 degrees in the shadow of the mountain it will be hard to find a good nights sleep but to be laying under a Peruvian sky of such beauty; there is nowhere else I would rather be at this moment in time.

After a while, Edgar stops to talk with me about legends of these stars passed down from generation to generation as visions of animals and religious symbols can be seen in the pure darkness and among the constellations in the Southern night sky. He shows me where the stars form the Cruz de Sur which carry a deep symbolism within Quechua mysticism.  The most famous constellation not only in Peruvian culture but for Australians, South Africans, Maori, Japanese, Brazilians or any culture that rests south of the Equator.  The same constellation with simply a different name from Cruz de Sur (Spanish), the Southern Cross (English), Acrux (Latin), Te Punga (Maori), or Cruzerio Do Sol (Portuguese).

He then points to my right to show me the Alpha and Beta Centauri, bringing to my attention the two brightest stars low in the Peruvian sky believed to be the Eyes of the Llama peering down on us from above. The Llama has played an important role in Peruvian society as they depend on these animals to endure life in the high Andes.  Sacrificial ceremonies in which the lives of hundreds of llamas were given to the gods, shows just how important and sacred these animals were during the Inca Empire. And in some sacrificial festivals even children became honored human sacrifices for honoring the most special ceremonies following drought, famine, an earthquake or even an eclipse.  Elders of the ancient Quechua people during the Inca reign told tales of nature and animal gods that have been passed on through the centuries. These tales continue to be told as we visit various ruins designed to honor these gods and now the people of Peru gladly share with us the stories that they have been told as children. As Edgar points out constellations that are common knowledge to the people of Peru; it is intriguing to hear legends of a sky that is different from that viewed in the Northern Hemisphere.

When I stare up at the sky from my home in the United States I look for the North Star, the Big dipper or Orion’s Belt; in Peru the Eyes of the Llama and the Southern Cross are something common for those here who know not of the constellations I have seen so many times from the pastures of Texas or beaches of Florida.

And I gaze upon the sky as if really looking at it for the first time and knowing I will never forget this moment when I really saw the stars locked in the dark universe luring above the Peruvian Andes at the base of Mt. Salkantay. 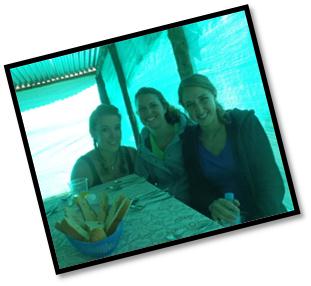