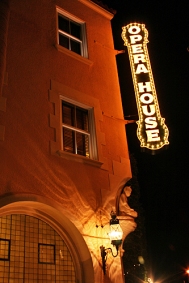 The night started with Tony Award winning choreographer Wheeldon’s The American to Dvořák’s String Quartet; a classical ballet with grace and eloquence.

In 1893, the Czech composer Antonin Dvořák spent the summer in the United States, where he wrote “The American” String Quartet. After moving to New York in 1993 at the age of 19, Christopher Wheeldon, an English international choreographer of contemporary ballet, was struck by Dvořák’s music as it vividly captured the essence of the rolling plains of the American countryside and the beauty that captures this vast nation. Wheeldon’s The American is a ballet that reflects the charm and beauty of this nation. 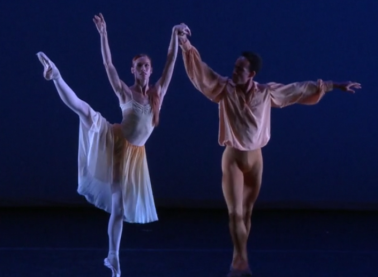 Following this contemporary piece was Sir Frederick Ashton’s comical masterpiece, A Wedding Bouquet. This fascinating unconventional ballet was first choreographed almost 80 years ago in 1937. Ashton choreographed an eccentric ballet with chorus based on the 1931 play, “They Must. Be Wedded. To Their Wife,” written by Gertrude Stein with music, scenery and costume design by Gerald Berners.

The stage sequence takes place at a turn of the 20th century wedding in a French village opening up with the maid by the name of Webster who is filled with energy and haste. A mix of joviality and slight tragedy, this is not everyone’s initial idea of a ballet as an on-stage narrator recounts the story with magnified use of reiteration by repeating phrases that seem fragmented and idiosyncratic in nature to accompany each act. As the words echo throughout the scenes in juxtaposition to choreographic dance, a bride and groom come together in marriage as a discarded mistress named Julia is left to sulk with her dog Pepe at her feet. Strong emotions build as young hearts are broken and the audience becomes acquainted with a parade of the groom’s former mistresses, “Josephine, Annie, Fanny, and Catherine.”

“It is going all nicely…nicely…nicely.” The façade of love fills the air as guests dance and drink in celebration of the newly married couple. However, this brings together a picture of deception, love, and infatuation while metaphors and some parodist depictions are integrated into the on-stage movement, music, and words bringing familiar scenes from Michel Fokine’s Les Sylphides and the romantic ballet, Giselle. Class, money, and marriage are interlinked as socio-political pressures and expectations are expressed as characters are introduced.

The cheerful socialite, Josephine, amusingly drinks too much champagne as she dances table-top, only to tumble backwards and later be carried off stage. The bride remains carelessly oblivious to her surroundings as Julia clings desperately and shamelessly to the groom’s leg as he tries to ignore her. “Bitterness is entertained by all,” the narrator repeats as the production comes to an end.

This dance performance brought about a fresh sensation; dynamic props and jazzy decor conducive to the 1960s, and costumes and dance style to reflect each line of the nursery rhyme. Artistic expression that brings words to life as the seven movements represent each days of the week.

Monday which opens with a ‘fair face’ young woman (Ellen Overstreet), pas seul with pose and props to accentuate her moves as a mirror reflects slight glimpses of her form and she steps over the large red “O” en arriére. While Tuesday transitions to a bright white set with two male dancers dressed in white and the accompanied ballerina in white flapper fashion motif with an appropriate millinery to complete the costume.

Wednesday filled with dark movement, mystery, and grief. Thursday staged in front of what looks like the Washington Monument with ballerinas dressed like flight attendants and a solo male danseur stands out as he is dressed in a brightly colored striped pant suit and hat. Friday is a pas de deux as they seem to intertwine in their movements. Their attire, half blue and half red, yet each side being the opposite color. 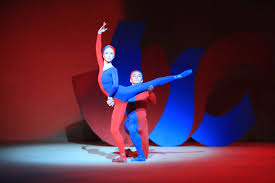 My favorite set by far was Saturday! As the stage fills with hard-working ballet boys practicing their cabriole, jeté and pirouettes. Slightly comical, daunting and competitive; the danseurs take over the stage with allegro and attitude as the Ballet Master corrects their mistakes.

And then, Sunday brings out the entire cast one day at a time with the eccentric brightly dressed, energetic “Sunday’s Child” (Elizabeth Sykes) accompanying each of their final performances. Grand conclusion and the whole performance was in seamless alignment with International Jazz Day on April 30th.

Perfect night and experience for my first Ballet, and a wonderful birthday gift! It is one thing to see such a production and expression of dance on screen but to feel each movement in the moment and on a stage in front of you is another experience.