The lights of the circus tent off in the distance begin to build a little excitement for that inner child in me. Circo Ponce: Circo Grande Famoso; a spectacle to see in the small town of Belmopan as trailers housing lions, tigers and camels drive through this capital city. The talk of the town and children can be seen coming from all directions with their parents close by to attend this family event.

A midget selling plantain chips from a cart dressed in a floral print dress, animals along the side waiting for the act to begin. Young adolescent tigers play while a circus worker walking up to the cage catches their attention and they begin to get excited, jumping up as he pats the nose of one and plays around with him as if he was just a kitten. A white horse grazing on hay, as a camel relaxes under the open air tent; a white Brahma stands out, while miniature horses and goats fill the pens near by.

The big top strung with lights, and the anticipation builds as we begin to wonder what this Central American circus will contain. $2o Belizean dollars for a ticket to enter and as Debbie buys hers a young boy asks for us to buy him a ticket to see the circus. Through a small hole in the car labeled Boletos a young man hands me my ticket and change for a Belizean fifty dollar bill.

As we wait an hour for the circus to begin I take particular notice of the string of lights, four rows strung from pole to pole yet the bottom strand was out; it reminded me of the movie ‘Big Fish’ with Ewan McGregor and all his adventures working with the circus.

Soon enough we see Marissa waiting in line. Marissa is the real-estate agent that rented us our temporary Belmopan home on Swasey Street near the University of Belize. A bright smile readily greeting us and her outgoing personality made her presence welcoming as it was heart-warming to see a familiar face in the crowd. She was here with her two daughters and son ready to enjoy her Friday night with family. She asks us to join her as we cut in line where her children wait. As we learn more about her and her life in Belize, Debbie and I are enlightened about the life of Belizeans and the struggles that she has faced in her young political career, relationships and as an activist in Belmopan. The strength of this woman is so empowering!

She shares with us random information about growing gang activity; the Crypts, Bloods and M13. View points on HIV/AIDS, domestic violence and sanitation. Sexual abuse, lack of child services, mental health stigmas, and the impact of Hurricanes on Belmopan. Rising occurrence of Measles and Hepatitis A, violence in the South side of Belize City, and the diverse cultural demographics of Islanders, Mayan descendants and Spanish influence. What better way in developing an understanding of the people of Belize than integrating with those who have lived here all their lives and understand the various public health concerns that face this country?  Of course it is only one view point and I will look forward to hearing if some of these issue will be mentioned additionally in the coming weeks. 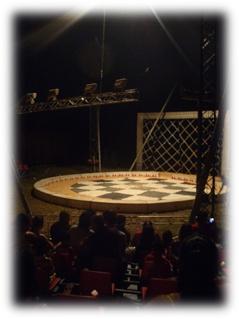 As we file in to the opening of the tent and give our tickets to the lady at the entrance we find a spot up front in the bleachers but minutes later decide to sit a little further back. A black and white checkered circle lies in the center of the circus ring or better known as the manege, the smell of popcorn lingers in the air; balloons for sale, and multi-color light sticks are sure to catch the eye of any child, while music fills the air.

The first act begins with a young woman performing tricks with hula hoops; dressed in short shorts with suspenders and half of a shirt. One act after another of jugglers, clowns, and what seemed to be an extortionist.  A Michael Jackson look alike with classic songs by the King of Pop, spinning around on what looks like a hay ring for feeding cows or better yet a human hamster wheel. It took a second for him to actually use it and his talents in maneuvering around on this object need a little more practice but it was interesting in itself to see him attempt his act.

Various animals begin to take the stage; the cutest baby buffalo you ever did see, and a camel that walks on his front knees. About half way through the show numerous men began to carry out sections of a slender fence as they piece them together to form a barrier

between the crowd and the Manege; then two tigers were released into this makeshift cage. At this time Debbie reiterates how she has already devised a plan to escape and points out her escape route just in case these tigers break loose and being mauling innocent victims from the front row of this audience. As she shares her evacuation route, she includes that her plan consists of grabbing toddlers as she attempts to out-run the ramped tigers. In response, I inquisitively state, “so you’ll be throwing the toddlers as a form of distraction if the tigers get to close?” Mind you she shares this right after I inform her that she will be fine just as long as she is not the slowest in the crowed. However, she was thinking along the lines of saving them, of course that was before I posed the question.

The tigers roar and swat at the trainer, perform tricks and jump through a ring of fire, when all of a sudden PITCH BLACK. The crowd is silent, the music off and as I sit perfectly still trying to adjust my eyes to the dark, Debbie states, “This is not part of the show; I don’t think this is supposed to happen.” The deep roar of the tigers is now the only sound heard while a couple people turn their phones on in the hope of supplying some form of light. The uniformists (ring workers) stumble around looking for some sort of light to shine on the manege where the tigers and their handlers await anxiously in the dark. Soon enough there is a spot-light beaming down, within a few minutes the

music and lights come back on and the show resumes as if nothing happened.  Just a normal occurrence in Belize I guess!

Within moments after the tiger act; the cage is down, tigers out and the circus ring fills with clowns and random Disney characters.  In the meanwhile, the “death ring” is wheeled out into the center of the manege and set-up for the next act. Debbie and I are highly entertained by these various Disney characters; these costumes looked as if they were sown together that morning and Minnie didn’t look wholesome at all with her short dress, knee high stockings and provocative moves! One of the clowns looked like something from a low-budget horror film and I now understand why some people have a fear of clowns…exposed to a Belizean circus at a young age may do the trick!

The “Death Ring” is the last performance of the night as one, then two and finally three motorcyclists drive on the inner side of a high bottomless grid circle while driving along the walls and upside down without

colliding into each other. All thanks to a little thing called centrifugal force and lots of practice. It was interesting to see three motorcyclists in there at one time; how they did not ram into each other astonished me. As they each exit the contraption, the crowd claps and roars in excitement, they circle the contraption and then one of the performers stops, takes off their helmet and reveals her long black hair and beautiful face. A young woman motorcyclist performing in the “death ring,” that is amazing! I always enjoy seeing a woman doing something daring and exciting like this.