Today I had a discussion with a friend of mine, from Romania, about how he normally dreams in Black and White but had a dream in color for the first time last night.  I have never really thought about the fact that some people dream in color and others in B&W so I did a little reseach to find out if this is a normal occurance.  Many research studies have determined that people that have grown up with B&W television and movies have a tendency to dream in black & white. This is also a factor that can be added to cross-cultural differences since the United States has been more suseptable to the processes and advancements in media coverage.  My Romanian friend grew up with an old television set that still captured life in Black and White; what a coincidence.  It makes me wonder if this is really a demention that is realistically possible…that media, television and movies can alter our dreams based on how advanced our technology is. What about people that lived before the time of these electronic transmitions in the form of entertainment?  Did they dream in color as well since it is what they saw on a day to day basis? Did they even have an idea of what life would even look like in B&W? 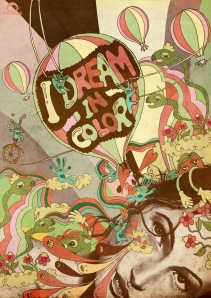 Also an interesting factor that we discussed was the fact that dreams in B&W tend to be less threatening and do not develop into nightmares.  But when he dreamed in Color it was a little more scary to him even though it was not exactly a nightmare with boogy-men and other creatures of the night.  This could be because color dreams have a tendency to be more realistic in nature since we see our lives in color.  If you are use to dreaming in B&W which is more like watching an old movie flick then it is hard to grasp the concept of a dream being just a dream when it is in color.  A majority of people that were born before the 1950s here in the United States dream in B&W while those who grew up when technicolor was developed and other advancements in media visuals normally dream in color. It is reported that only 12 % of people actually dream in B&W now.

And as I read other’s ideas on the subject the question was asked “Would our children then dream in High Definition?”