The train station in Bruxelles Nord is a sight to see! The hustle of people departing the arriving trains, filling the platforms that connect many different cities to this single destination or some may continue on to various other locations. However this is normal in any type of station all across Europe, or the world for that matter, where people are traveling or commuting to work via train, bus or plane. 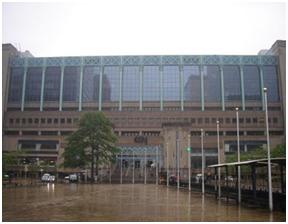 Gypsies in bathrooms collecting .40 euro to use the facilities, homeless people sleeping in corners and on benches, teenage youth brake dancing and beggars asking for change. Flirting young boys stare and give compliments as I walk through the station, many languages fill the air; particularly French since half of Belgium is composed of a French speaking population while the other half is Flemish. The smell of un-bathed homeless people and urine engulf the air as you approach the front doors leading to the outside. Slightly cold and light rains are now embracing the Belgian city and to watch the people in the train station as we wait for Thomas, our Belgian host, is an interesting sight to behold nevertheless heartbreaking at the same time. It is to be anticipated in larger cities to have numerous homeless and poor populations but it is especially remarkable to see that these people have found a home in Bruxelles Nord Station and are not anticipated to leave nor be harassed by security guards that patrol the area.

The station is in the center of the business district of Bruxelles and from the outside looks grand and well kept. Even as you walk through the station it is not somewhere that seems like it should be a slum for those escaping the cold and wet streets but a place where people gather their first impression of Bruxelles or pass on their way home from work. A place were there should be convenient stores, cafes, book stores or internet cafes not empty, vast space with soaring ceilings and no where to sit since all the benches have been converted into sleeping areas with piles of folded clothes and trash. The stench of urine overwhelms the senses since the restrooms cost a small fee to be able to use them. To an extent it is nice that they have a place to stay but to not have proper sanitation leaves this place in a condition that is less desirable then it could potential be if everyone was able to use the WC. To think they are given the opportunity to have a roof over their head but be exposed to health issues that may only lead to health problems for them as well as those passing through should be a matter that needs to be addressed.