Dubbed the Land of Fire and Ice, Iceland is a unique destination.

It all started about 7 months ago, when I came across an advertisement for WOW Air. Only $99 round-trip to Iceland on this new airline with routes from Boston to Keflavik starting May 2015. Within a matter of an hour, I had two tickets purchased and plans formulating in my mind about how this trip was going to play out.

Flying stand-by on Spirit from Tampa to New York we spent the day in New York City. Taking a late night MegaBus to Boston we were exhausted by the time we arrived. With little sleep and our flight not leaving until later that evening, we decided to get a hotel to ensure we were well rested once we arrived in Reykjavik.

Our tickets are finally in our hand and the excitement grows as we wait patiently to board our flight. One of the first passengers of WOW Air and at a great cost.

With a 5 hour flight ahead of us, I take this time to map out our next couple days and identify our must-see destinations. Going over tips about driving in Iceland, must try foods, hiking grades, animals to keep an eye out for and directions to hidden gems. So much to see and do over the next 8 days.

We arrive at Keflavik International Airport early morning around 6am. Unfortunately, they lost Gabe’s rucksack and we spent some time on the phone trying to figure out our next steps. They reassured us that once they locate it they would call us and it would be hand delivered to us by a carrier. How difficult it was for Gabe to walk away from the airport empty handed with minimal warm clothing, however we decided to not let this ruin our first day in the Land of Fire and Ice.

Renting a car was surprisingly easy and cheap through SAD Cars. We ended up spending a little over $200 on our rental for a little over a week. Keep in mind, the car was a beat up little black Toyota Yaris that looked sandblasted by the treacherous Icelandic winds. However, it was perfect for the two of us to explore Ring Road with a detour to the West Fjords.

Drove through Reykjavík stopping here and there as we began our journey to the southern part of Iceland as we make our way along the Ring Road where we plan to circle the island over the course of the next 8 days. I was able to see some familiar sites, bringing back fond memories from my first time visiting Reykjavík in 2009. 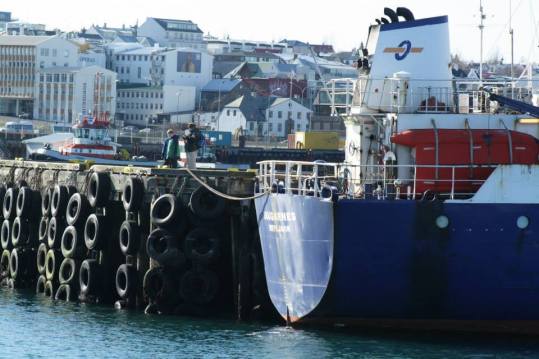 Reykjavík is surrounded by the Atlantic Ocean with waterfront paths stretching around the city. Beauty, culture, and art around every corner with many places to stop and admire the scenery especially along these coastal paths. One spot in particular, would be seen as the destination of choice for all that visit Reykjavík. 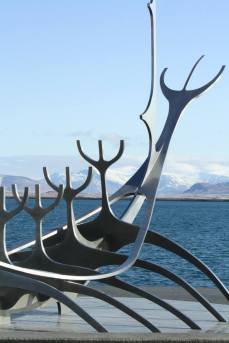 A massive steel sculpture by Jon Gunnar Arnason which seems to resemble a Viking ship, but in fact is an ode to the sun. The epic view of Mount Esja in the backdrop with waves crashing along the outer edge of where this sculpture rests will allow anyone to develop an appreciation of the art and natural beauty of Iceland.

Reykjavik’s street art scene has expanded since my last visit with beautiful murals stretching across the sides of buildings by artists obviously commissioned for their work versus the uninviting graffiti that was more common in previous years.

Beyond street art, cutting-edge music brings Reykjavík to life as festivals and live music are a common scene. That being said, Wall Poetry is a collaboration between Iceland Airwaves Music Festival and Berlin’s Urban Nation was launched as a way to bring together music and street art. Many of the pieces you come across in Reykjavik are part of this project and have been inspired by music across many genres. Download the playlist and explore Wall Poetry in Reykjavik through this self-guided walking tour!

Geological features are a sight to see along the famous Golden Circle; the stars of the show being the Þingvellir National Park, the Strokkur Geysir and the Gullfoss Waterfall. This is the most visited tour in all of Iceland since it is easy to join a day tour out of Reykjavik. The luxury of driving it ourselves; more flexibility, able to take our time, stop where ever you like along the journey, and we didn’t have to be shuttled on a large tour bus with 50 other tourists all fighting to capture that perfect shot. Instead, you can wait patiently for everyone to load up on those buses to have a more secluded image or wait for the perfect frame to capture the essence of these natural wonders.

Where exactly is the Golden Circle? Here is a basic map with some of the spots that we visited along the way. Only thing, instead of returning to Reykjavik, we continued to move toward the Southern part of Iceland toward the coast as were would continue on to circle around the entirety of Iceland.

After exploring the streets of this most Northern Capital we began to head to the east where we stopped to see Þingvellir National Park which is surprisingly the only UNESCO World Heritage site on the mainland of Iceland. This national park is a major rift with dramatic fissures and cliffs exposing the intercontinental drifting only to be surrounded by piercing mountains on three sides with a stretch of lava fields covered in a grassy moss. Lake Þingvallavatn lies to the southern end of the national park  providing a dynamic view that provides unparalleled value as many stops along the way overlook these dramatic Icelandic landscapes. It was interesting to see the ‘Varda’ on the Moors in Iceland which are balanced and stacked stones commonly seen across Iceland. They were used as markings along the roadways and paths to help guide those on their journey.

Historically, Þingvellir National Park is of great significance to the Icelandic people and is not only their first National Park but it was a place where their General Assembly convened to hear the laws and settle disputes. Furthermore, it is a Geologists dream destination as it is the site where the continental drift between the North American and Eurasian tectonic plates come together and can be clearly seen in the faults that traverse this gorgeous region. Surprisingly enough, these tectonic plates are pulling apart at the rate of 2 centimeters per year.

Next time I visit Iceland, scuba diving in Silfra at Þingvellir National Park will be at the top of my list of thigs to do.

Along the Golden Circle, the Geysir Geothermal Springs has been active for the past 1,000 years. Comprising of more than a dozen hot water blowholes including Geysir which gave its name to other geysirs worldwide. That being said, the most famous geysir is Strokkur which is the most active as it erupts every few minutes reaching 50 to 100 feet in the air.

Waiting for it to rupture, you can see the pressure build as the water boils and is sucked in and out of the ground until it explodes into the sky.

Beauty of the Gullfoss Waterfall

Located a few hours from Reykjavik, Gullfoss is believed by many to be one of the most beautiful waterfalls in the world. Walking along the path you can visibly see the spray filling the air as it settles upon your skin. Gazing down into the water as it cascades across the rocks and ice, it is captivating to see the contrast between the turquoise blue waters, the black rock, and pure white of the fallen snow and ice crystals. 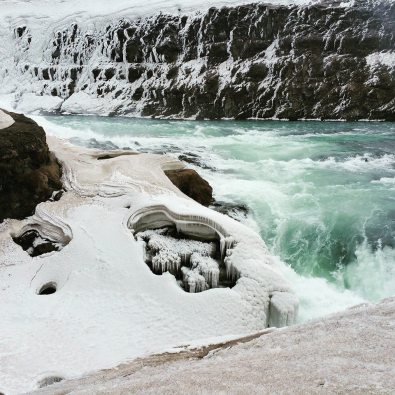 Driving in Iceland can be challenging as the weather changes ever so quickly, however traffic is non-existent especially outside of the city. Honestly, it is truly surprising to see there are not many people living in the countryside. As you follow along your journey using an Icelandic map, we would be under the impression that a small town is up ahead since it would be named on the map, only to our surprise we come across a single farm house or church with nothing else in sight.

After visiting these three sites, we decided to take a nap in the car before continuing south. As we continue on through Hella and Hvolsvöllur, we head east to Fljótsdalur where we located the only youth hostel in the area that we decided we would stay for the night if they had space for us.

The hostel is quaint and full of character; grass on the roof which is typical of older Icelandic homes, gardens surround the cottage and sheep roam around outside along the hillside. Built 100 years ago, it overlooks the volcano Eyjafjallajökull that erupted in 2010, not long after my initial visit to Iceland. What was interesting about this eruption is that the volcanic ash interrupted air traffic throughout Europe due to the risks it poses to planes.

Eyjafjallajökull rises up from the valley to the east while the road leading to the hostel winds around a mountains edge to the west. This mountain-side is lined with sporadic farm houses and waterfalls ribbon down the side of the cliff along the way. Once we got to a dirt road, we continued on 8km until we finally approached the hostel.

This hostel feels like home with a kitchen stocked with anything you may need. During our visit, there was only one other couple staying in the hostel and we were fortunately enough to have our own room in the attic of the of the old farm house with a window overlooking Eyjafjallajökull. 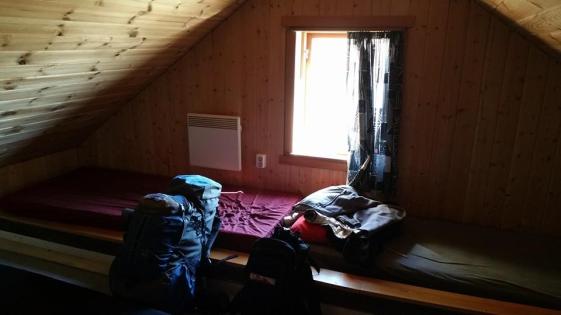 We only scratched the surface during our time in the South West region of Iceland. There are many waterfalls, caves, and natural wonders worth seeing especially in this part of the country. Here is a map to help you plan out your adventure and some spots to consider. 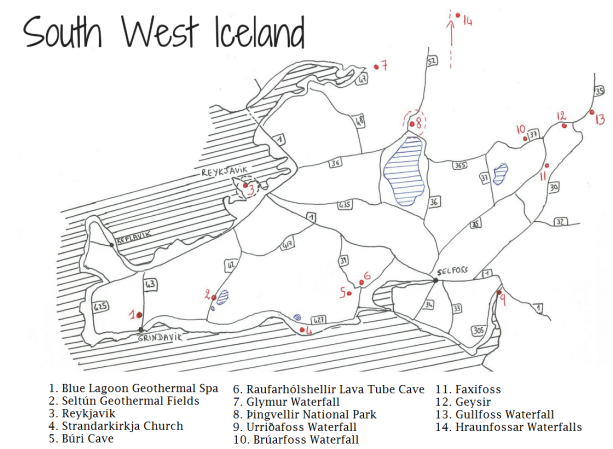